Will the blockchain free music from being free?

The idea of a path of least resistance makes only too much sense, yet so often it’s not the path we find ourselves on. And don’t worry, this blog, whose focus is the media and entertainment industries in the digital era, is not about to go all self-help on you. Instead, I will bring you some wisdom gleaned from a talk I attended yesterday, given by Grammy-nominated producer and musician Darryl Neudorf.

His name may not ring a bell but one of these names probably will: Neko Case, Sarah McLachlan, The New Pornographers -- all artists with whom he's worked. Oh, and he co-wrote this song, a Top 10 hit for Hootie & The Blowfish in 1997.


Neudorf took us through a fairly quick but compelling presentation that outlined the state of the music industry today, namely musicians getting fractions of pennies for streams on services such as Spotify, then explaining how we got here, and then laying out his plan for a better tomorrow for the music business. Lofty goals and a big vision, but incremental thinking is probably not what’s called for, 17 years post Napster, and still no working business model for the music industry.

Whether obtained legally or illegally online, the advent of digital music has meant songs becoming unbundled from albums; and the music industry’s unit economics were traditionally based on album sales, which tended to be 1 or 2 songs you wanted and 8 to 10 you didn’t want. Too bad, you’re stuck with the whole pizza, even the slices covered in anchovies that you don’t want to get anywhere near. That’s just how it worked.

Furthermore, platforms aka streaming services, such as Pandora and Spotify, have a business model based on the freeconomy, in which tens to hundreds of millions of users, at aggregate, create an attractive market for advertisers. A small percentage of users pay for an ad-free service, which usually runs about $9.99 month, but most do not, paying, instead with data, not dollars. Also known as the great 21st century tradeoff.

The economics of streaming services is that they generally pay out 70% to rights holders and retain 30% of revenues for themselves. The problem for many artists is that they, the artists, are not the rights holders; it’s a label or publishing company, and that is therefore where the bulk of the money goes. This is just one part of the landscape in which musicians today exist. Another is all the songs uploaded to YouTube by non rights holders, with, in lieu of visuals, a slide show, lyrics on screen, or sometimes just a picture of the album cover. Music on YouTube is a whole other thing, and for today’s post we’re limiting the discussion to the situation with streaming.

As Darryl Neudorf pointed out in his talk:

From the mid to late 90s the narrative was one of empowerment through the Internet; that there would be a revolution based on a direct-to-fan model; and to some extent this came true, with companies such as CD Baby and eMusic arising out of the first wave of music freed from its physical form factor

Then came Napster. Talk about three words that don’t even begin to describe the upheaval and draining of revenue from an industry.

If you really want to dig into the full story, it’s recounted in detail in a book called “How Music Got Free: The End of An Industry, The Turn of The Century, and The Patient Zero Of Piracy”. Post Napster came what Neudorf termed ‘the dark ages’, from 2000 to 2010, in which revenues for recorded music continued to dwindle each year, despite the emergence of the iTunes store and at least some people getting into the happen of paying for downloads.

The next phase was the coming of the streaming services, and 2014 was the first year that revenues from digital and physical sales were equal in the music industry; 2015 was the year streaming became the main source of revenues for music labels.

Streaming services have tens of millions of songs, so unless you know exactly what you're looking for, you're going to be at least somewhat reliant on playlists. And playlists on streaming services -- which are essentially what radio once was – skew to major label bands, pointed out Neudorf. In other words, the same gatekeepers that were in place in the world of radio airplay are now inhabiting the world of streaming.

But wait, there's more. Several years in, not a single streaming service is even close to becoming profitable. In fact, there’s evidence that they’re becoming less profitable with time.

As you can see, problems aplenty. But what about solutions? Sell t-shirts? Tour more? Do intimate gatherings for superfans? Yes, all of those things can and do help, but Neudorf has a more radical idea in mind, and he’s not the only one.

The idea is based on something called the Blockchain. If you’ve heard of Bitcoin – which, let’s face it, nobody really understands, then you’ve had exposure to blockchain, as it’s the technology that powers decentralized currencies, sometimes referred to as cryptocurrencies, the most well known of which is Bitcoin.

Boston’s Berklee School of Music published a report last year outlining the benefits of decentralization for the music industry. 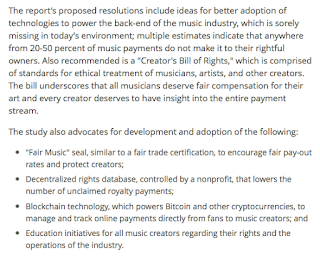 All of this inspired Neudorf to start this project in mid 2014 – The POLR – or path of least resistance, which he calls a new model for a 21st century music industry. The model is based on the concept of A2A – artist to appreciator, working around the usual intermediaries. Is this direct to fan but with a different acronym? Not exactly. Because using blockchain technologies the licensing can happen at the point of upload, and with metadata added that lists writers, performers, producers, and any others with a stake in the sound recording, micropayments can go be paid directly to them. As long as only rights holders are able to upload, unlike the situation on YouTube and Soundcloud. This particular system hasn’t yet been built, but with the thinking in place, it’s probably only a matter of time. Imogen Heap is an artist already using blockchain; in fact she sold the first song using blockchain, so we know that part of things can work.

To conclude his talk Neudorf quoted software engineer Vinay Gupta, who said: “Whoever controls the database, controls the future of the music industry.”

And if music is going to be a service, not a product, the thinking of Gupta, Neudorf, Heap, and other forward-thinking individuals may be one way for the balance of power to be reclaimed by artists.

Organizing Without Organizations: The DAO, the Blockchain & the world's biggest cash heist
Free-conomics: Signs of the end of the digital free-for-all?
Decentralization, Douglas Rushkoff, and the Digital Economy

Postscripts:
Props to the crew at Toronto's Music Tech Meetup for organizing the event at which Darryl presented.
To learn more about the workings and potential impact of the blockchain, there's the book Blockchain Revolution by Don and Alex Tapscott, coming in May 2016.
Posted by Leora Kornfeld at 9:41 PM
Email ThisBlogThis!Share to TwitterShare to FacebookShare to Pinterest